Staff and residents at Barchester’s Fairview House Care Home in Danestone are over the moon because their brilliant head chef, John Grover, is the winner of the Scottish finals of the National Association of Care Catering’s Care Chef of the Year competition.  John, who won the competition outright in 2018, is now off to the national finals in Grantham and on track to scoop the double – no chef has ever won the competition twice! 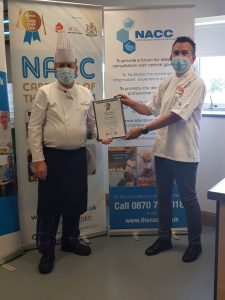 To get to the national finals, John competed against two other regional finalists.  In just 90 minutes, John had to prepare three portions of a nutritionally-balanced two course meal which was judged against seven strict criteria.  Each dish must be balanced and have five nutrient groups present, John had been working hard on his menu selection to ensure is was not only tasty but also especially tailored to ensure maximum nutrition for his residents.

His carefully chosen dishes included a delicious main course of seared fillet of salmon with chicken mousse wrapped in cabbage, smoked potatoes and chanteray carrots finished with a leek, mushroom and white wine sauce, packed full of flavour and protein, and an innovative desert of cheese mousse selection with an apple and pear chutney and vegetable crackers for additional vitamins and minerals. 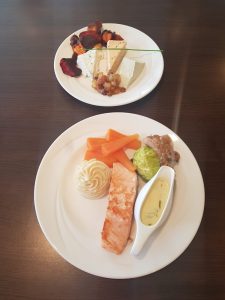 John has been a chef in the care sector for seven years, he joined Fairview House in March 2020.  Prior to that he worked as a chef in the military for 24 years spending time in two military hospitals where he was no stranger to working on special diets.

John comments: “I absolutely loved taking part in the competition.  It was really nerve-wracking but I was confident in my dishes and I knew if I got the execution right then I was in with a good chance.  Happily it went like a military operation, practice makes perfect as they say!  It was wonderful to be able to tell the residents I’d won, the atmosphere in the home is amazing – we’re all on such a high!”

General Manager of Fairview House, Arlene Campbell, says: “We are just so proud of John and all the hard work he has put into preparing and practicing his dishes. We are all very lucky to have him as our head chef, he is a much-valued member of the fantastic team here at Fairview!”